Just a quick tutorial as it came up in a build.

How to make broken clay pots.

Take a resin or plastic pot, or a bead that you are using to simulate a pot and use insta-mold/blue stuff/omyaru to make a one sided mould of the top, bottom and a side.

Use milliput/aves epoxy sculpt/magic sculpt to fill the mould and take a brush handle to push it to the sides and top of the mould.

You want it thin on the sides but not too thin.  If the putty is slightly translucent when holding it up to a light it is too thin. 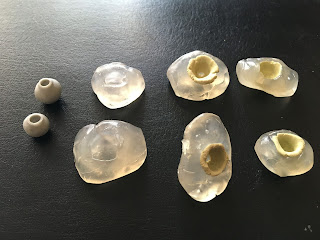 Wait for the putty to set for 24 hours so it is completely cured.  De-mould and start clipping and cutting each piece.  Try to make it look like natural breaks and glue in place. 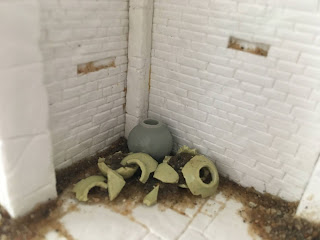 I will probably superglue some broken egg shells on this pile too just to bulk out the broken pots.

Email ThisBlogThis!Share to TwitterShare to FacebookShare to Pinterest
Labels: How To, Scratch Building

Tried out the new Frosgtrave 2E rules last night and it was a bloodbath.  We did two fresh level 0 warbands and went to town.  Played the Summoning Bell scenario on a 3X3 board.  Mechanically the rules were the same and it was an easy play.  The particulars were what caught us both out.

I fielded an illusionist and added the spell blink to my arsenal.  It was cast five times between my wizards and only “worked” once.  The thief that it was cast on made his will roll and the spell had no effect.

Between the first four randomly rolled monsters in the corners and the double random encounters almost every turn we ended up with the following monsters on the board:

Thankfully all the big stuff ended up coming from only two adjoining sides giving both of us a clear shot to get something off the board.

I managed off with only one treasure, my apprentice and a wounded thief.  After the game my wizard ended up with a niggling injury so I have that to look forward to.  All of my other models came off fine.  I also missed my chance for my ulterior motive.  I opened the casket but was unable to spend the time to finish the conditions on the card.  I did kill the ghoul, two skeletons and a Snow Leopard.

Mark ended up stopping the bell , a troll helped him finish his ulterior motive by killing one of my models and he collected two treasures.  He only had two thieves make it off the board and his wizard earned twice the experience but also died for his troubles.  His apothecary ended up seriously injured and will not play the next game.

All in all it was a fun if bloody game.  I would suggest that anyone looking to play this scenario get their wizards up a couple of levels prior to attempting it.

On to some random photos with no descriptions. 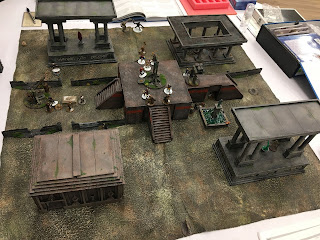 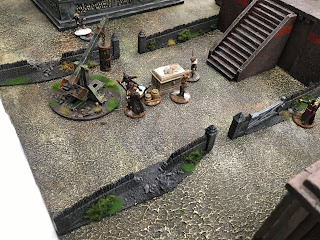 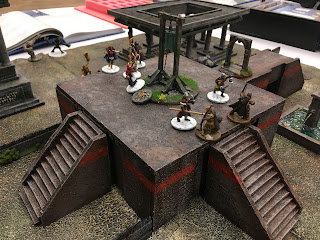 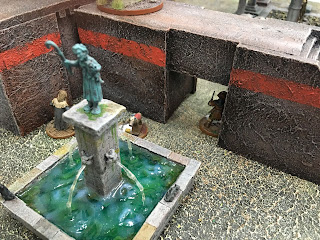 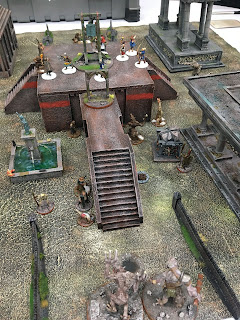 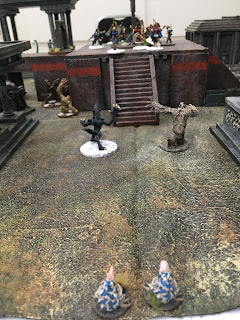 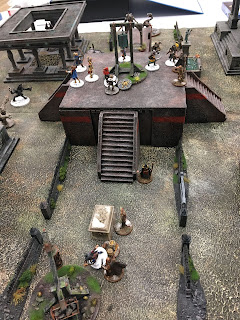